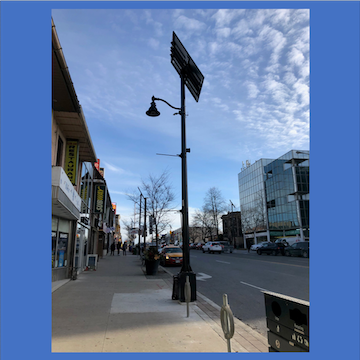 New project in one of Toronto’s premium neighbourhoods is one of many new installations in Ontario for Clear Blue, whose sales in the province soared in 2018

January 15, 2019, Toronto, ON – Clear Blue Technologies International (“Clear Blue” or “the Company”) (TSXV: CBLU), the Smart Off-Grid™ company, today announced that 40 of its Illumient solar-powered street lights have been installed along Bloor Street West in Toronto. These smart city lighting systems will also host Wi-Fi for the area, and will feature banners promoting Bloor West Village. The project was driven by the Bloor West Village Business Improvement Association (BIA), the first BIA ever established in the world. The project value to Clear Blue exceeded $400,000 CAD, and includes on-going management services from Clear Blue, using its Illumience cloud software.

Ontario is a growing domestic market for Clear Blue. The Company’s revenue from sales in the province were 515% higher in 2018 compared to 2017. 18 municipalities in Ontario have installed Clear Blue’s Illumient lighting systems, for a variety of uses including roadways, downtown areas, residential streets, parks, and signage, at over 40 different locations. Overall, the global solar street lighting market is projected to reach $17.78 billion (USD) in revenue by 2024, a CAGR of 23.23% from 2016 to 2024.[i]

“We are excited to collaborate with Clear Blue for this project, marking another step forward for our BIA which will celebrate its 50th anniversary next year. Clear Blue’s Smart Off-Grid lighting systems are far superior to the standard solar lighting that was in place beforehand, and are a highly reliable, cost-effective solution for our community,” said David Howitt, chairman of the Bloor West Village BIA. “In addition to their technical excellence, we found the team at Clear Blue to be highly collaborative and supportive throughout the process and we are pleased with the end result.”

Bloor Street West runs through Bloor West Village, a shopping district in a high-end residential neighbourhood in Toronto that is home to more than 400 businesses. Despite its location on one of the busiest streets in Toronto,access to grid power is prohibitively expensive.  It was therefore imperative that the lights were equipped with an off-grid solution capable of powering this critical infrastructure. The new sidewalk lighting will highlight businesses and restaurants to attract more pedestrians in the evenings and enhance safety and security. The motion sensors and analytics will be used for tracking activity in different areas throughout the night.

“As a Toronto-based company, we are pleased that our Smart Off-Grid lights were selected to light this thriving area of the city,” said Miriam Tuerk, CEO and co-founder of Clear Blue. “This is part of a much wider transition toward Smart Off-Grid as a way to power critical urban infrastructure in mature markets, especially where it is too expensive or disruptive to connect to the electric grid.”

Smart Off-Grid lighting is part of a growing trend by cities toward Smart City infrastructure.  In addition to lighting, the systems can power a wide variety of Internet of Things devices such as security cameras, WiFi hotspots, sensors and more.

Prior to the installation of Clear Blue’s Illumient street lights, Bloor Street West was illuminated with solar lighting which lacked smart off-grid technology. This resulted in significant downtime and costly maintenance. Thenewly-installed Illumient systems are equipped with built-in communications, allowing the lights to be remotely managed and operated, lowering maintenance costs while delivering high reliability. The motion sensors on the lighting poles, along with Illumience’s predictive weather analysis capabilities, will preserve battery power and ensure the area remains lit in all seasons of the year.

Funding for the project was split between the City of Toronto and the BIA. The City of Toronto has responsibility for the sidewalks and wanted to eliminate the many dark spots that limited visibility at night.

Clear Blue Technologies International, the Smart Off-Grid™ company, was founded on a vision of delivering clean, managed, “wireless power” to meet the global need for reliable, low-cost, solar and hybrid power for lighting, telecom, security, Internet of Things devices, and other mission-critical systems. Today, Clear Blue has thousands of systems under management across 35 countries, including the U.S. and Canada.