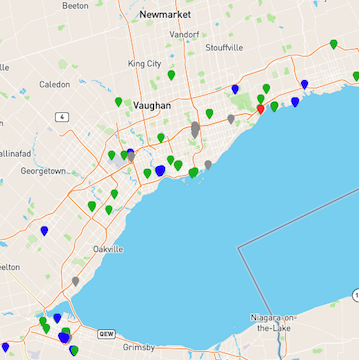 October 29, 2018, Toronto, ON –Clear Blue Technologies International Inc. (“Clear Blue”) (TSXV:CBLU), today announced it has won 12 new projects in Ontario this year for its Illumient Smart Off-Grid lighting, exceeding its 2018 projections for installations in the province. Revenue from sales in Ontario YTD are 515% higher than in all of 2017, and the number of lighting systems increased by over 300%.

To date, 18 municipalities in Ontariohave installed Illumient lighting systems, for a variety of uses including roadways, downtown areas, residential streets, parks, and signage,at over 40 different locations.

“The global market for solar street lighting is projected to grow by over 23% CAGR over the next few years,” said Miriam Tuerk, CEO and co-founder of Clear Blue. “The rate of projected growth in the Americas is close, at almost 20% CAGR, and also will be driven by the explosion of Internet of Things (IoT) devices that need to be powered. As an Ontario-based company, we are pleased by the growing number of municipalities in the province who are selecting our Smart Off-Grid lights for their critical lighting and IoT infrastructure.”

With built-in communications, each Illumient solar-powered light is remotelymanaged, controlled and monitored over the internet, ensuring the highest reliability and low maintenance costs. In addition to lighting, these same systems can power security cameras and a wide variety of Internet of Things devices like WiFi hotspots, traffic counters, sensors, and more.

Some of the municipalities in Ontario using Clear Blue’s Illumient Smart Off-Grid lighting are: