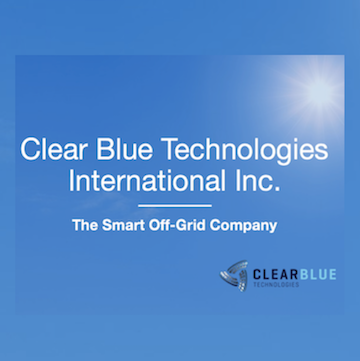 Clear Blue CEO Miriam Tuerk commented: "Our trailing four quarters results reflect the typical lower revenue generated in the first half of most years, however we are pleased with the significant improvement in trailing four quarter gross margin and gross margin percentage which reflect our efforts to drive profitability for the Company. We have increased inventory year over year in anticipation of the trend repeating in 2019. Most importantly, we are beginning to see results for our push into the telecom marketplace in Africa and South America where conversion of even one of our pilot projects into a full rollout would be transformative for the Company. Because these are large, very visible public projects where we bid with multiple partners, we have provided guidance on the scale and timing of potential opportunities. While there can be no assurance we will win one of these projects and it will be 2020 before successful bidders are selected and achieve rollout, we are encouraged to have delivered 8 Proof of Concept projects and 3 First Installs, representing a total of 146 systems to date."

Over the last 3 years, the first half of the Company’s fiscal year has traditionally been a small portion of its full year revenue, ranging from 14% to 39% of fiscal year full revenue.  2018 was at the high end of this range due to a single large order in Q2 of 2018.  Notwithstanding this, the YTD results for 2019 are lower than 2018.  The Company believes this is not indicative of any change in the company’s outlook and is due to timing of a number of orders and the lumpy nature of Clear Blue’s current business.

While Clear Blue had a 32% TFQ revenue decline to June 30, 2019 year over year, gross margin increased 103%, in effect doubling gross margin with half the revenue. These results reflect the Company’s focus on generating positive cash flows from operations.  Management believes this trend demonstrates that we are executing to plan and delivering on the opportunity for profitable future growth.

Operating expenses increased $442,567 or 35% for the three-month period ended June 30, 2019 compared to the same period in 2018.  As the Company concluded its RTO in Q3 of 2018, the Q2 2018 period is prior to funding and Q2 2019 is post funding.  The additional expense is mainly due to increased research and development expenditures and increased business development expenses.

Clear Blue competes in a marketplace where most competitors focus on large, on-grid systems or they focus only on one-time sales of hardware products.  The Company’s focus is on the off-grid market and the company’s business model is to provide an ongoing Energy as a Service delivery model where customers receive long term assurance of reliable power and the Company is paid additional revenue over time for that reliability. As a result, Clear Blue holds a first mover advantage and leads the market as evidenced by deployment of our systems in more than 35 countries.

2018 was a year of 65% growth year over year.  Although the first part of 2019 has shown smaller numbers than in 2018, management believes its go forward growth plan and substantially enhanced gross margins will follow the trajectory that it has demonstrated in the past.

In the lighting vertical, the company’s future growth prospects rely on three things:

The company believes the EaaS program will have a significant impact on its future growth. Clear Blue estimates, for each million dollars of yearly product sales, over a 10-year period, the EaaS will accumulate rates for an additional $650k of revenue.  The involved nature of EaaS revenues is projected to further facilitate customer relationships for future contracts.

With respect to the Telecom vertical, it is now two years since the Company did its first pilot project with its first telecom customer.  As of the end of Q2 2019, the Company has delivered 146 systems over 8 Proof of Concept projects and 3 First Installs. Most of these projects are in developing regions such as Africa and South America where off grid powered telecom will be the primary communications network.  This includes development of traditional tower infrastructure, satellite/wifi networks and, in the future, new 5G networks.

In the telecom industry, infrastructure projects follow a frequent pattern of:

As customers transition to the full rollout phase, the size and value of the contract grows significantly.  There can be no assurance we will win a Rollout contract, however the bid processes currently underway are structured for a mid-2020 decision by the project operators.  Taking into consideration our caution regarding forward looking statements, the Company does see potential for one or more of its early installs transitioning to the larger roll out stage if one of our bid partners wins a portion of one of the major Rollout contracts.

In summary, the Company expects to continue to see variable quarterly revenue due to the variance in size and timing of new contracts and market expansion rates.  Management’s longer-term goal and strategy is to mitigate revenue variability through continued diversification into a balanced blend of developed and emerging markets, as well as to increase the recurring portion of our revenue.

The Company will host a conference call to discuss its latest financial results at 12:00 PM Eastern Time (Canada/U.S.) on Wednesday, 28th August 2019. Those interested can register at https://zoom.us/webinar/register/WN_5HrRcQKnTpmKKKAenylHRg